The city’s ongoing Vision Zero initiative to prevent pedestrian and cyclist deaths has led to a variety of infrastructure changes around San Francisco, from concrete bulb-outs to revamped bike lanes. This week, the city plans to break ground on another experiment: its first “protected intersection,” set to go in at the busy crossing of Ninth and Division streets in SoMa.

Ninth and Division is one of the intersections in the city’s “high-injury network,” the 12 percent of streets where severe and fatal crashes are most likely to occur… 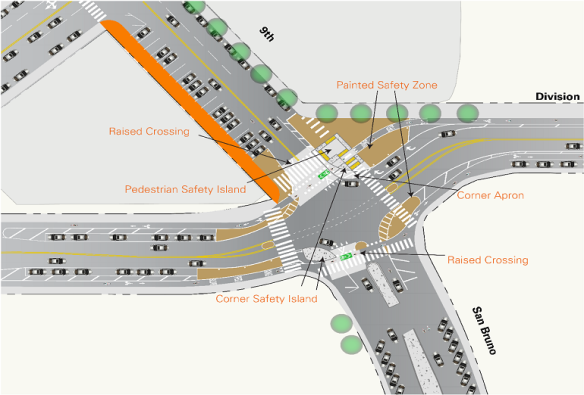 A rendering of the planned changes at the intersection.

As part of the project, Ninth Street will become two-way from Division to Brannan, with a new sidewalk and angled parking on the south side to narrow the roadway. The parking-protected bikeway on Division, installed between Bryant and Folsom last year, will also be extended between Ninth Street and Potrero Avenue in both directions.

The project will also entail some street improvements: roads will be re-paved not only at the intersection itself, but on Ninth between Brannan and Division and Division between Ninth and 10th.

SF Public Works is starting construction later this week, and hopes to wrap up the changes by the end of the year.

Go ahead. Do your worst. Create the biggest traffic jam you can. Piss everyone off who is not already pissed off.
Slow traffic on major streets leading to freeway access just as the city is bringing back shipping on the South Side of the Bay. How are all those 200,000 cars going to get to San Rafael from Pier 80? Are you planning to deliver them by drones? Not too many routes to the bridge from Pier 80 that a big truck an take. This is one of them.
This plan along with the Van Ness and Lombard plans, should push the residents over the edge and end the rule of this regime. As long as they know it is coming before the November election.