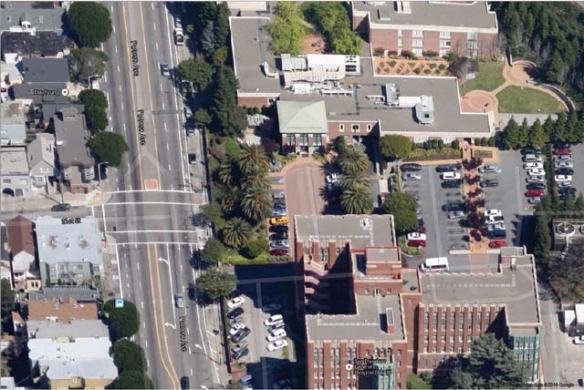 Overhead google shot of Potrero before the medians were installed.

In this case, a mistake led to the revelation of more parking removed for a safety and transportation project on Potrero Avenue than the community was initially was told — 60 spaces total, instead of 41.

That allegation from neighbors was later expressed by Supervisor Hillary Ronen’s office to the San Francisco Municipal Transportation Agency, which heads the project.

Potrero Avenue resident David Jayne recorded video showing one of the newly installed traffic medians preventing an emergency vehicle from accessing the hospital. It showed an ambulance flashing its lights while sitting behind traffic at a red light by the entrance to the hospital.

Photos of fire trucks and engines pulling into General Hospital before the median was installed. The large vehicles used both sides of the street to make their turns. Photos by zrants

Traditionally, Jayne said, the ambulance would have driven around the pile-up, into oncoming traffic, and entered the hospital. Instead, it was blocked by the new median…(more)