Twin Peaks’ eastern roadways may soon be closed to vehicles altogether, with pathways only for walkers and cyclists.

That possibility is pending a vote by the San Francisco Municipal Transportation Agency’s Board of Directors on Tuesday.

If approved, “The Twin Peaks Boulevard Figure Eight Pilot Project” would last two years – from June 1 to May 31, 2018.

At that time, data and feedback from the closure would be assessed for a permanent closure.

SFMTA spokesman Ben Jose said the pilot is intended to “make one of The City’s most iconic destinations more accessible, to more people, by foot and bike,” noting that it would not reduce parking.

The closure would not affect Christmas Tree Point, a popular lookout spot for drivers replete with quarter-fed binoculars. But besides that lookout spot, the eastern side of Twin Peaks Boulevard – with a viewpoint of downtown, the Mission, the Bay Bridge and beyond – would be the sole province of walkers and cyclists.

Cars would be limited to the west side, which is considered a less picturesque view. The western side of Twin Peaks Boulevard would also be turned from a one-way street into a two-way street, according to SFMTA documents. Additional parking would be provided at intersections, and temporary barriers would be installed.

The project will cost an estimated $60,000, according to the SFMTA.

But some neighbors are none too happy with the proposal. Dona Crowder, president of the Twin Peaks Improvement Association, told the San Francisco Examiner that neighbors feared for road safety.

Originally, the road was engineered to be one way in each direction “for safety,” she said. Now she worries cars driving through the area will need to contend with oncoming tour buses, which frequent the area regularly.

SFMTA’s proposal for Twin Peaks was the subject of a public open house in June 2015, as well as a survey of residents with 450 responses and ongoing meetings with tour bus operators, neighborhood groups and others, according to the SFMTA… (more)

Is cutting off a view by limiting access not discriminating against non-walking, elderly and others who can’t physically walk or bike on a steep hill?

SAN FRANCISCO (KPIX 5) — A Muni driver may face disciplinary action after being caught on video initially refusing to let a wheelchair user board his bus, and verbally harassing the woman.
Liz Henry filed a complaint with the SFMTA after the driver at first refused to let her board because the bus was too crowded last month.
The exchange was caught on surveillance video.
Driver: “Now what you got to do is, catch the next one.  Catch the next one!”
Liz: “You can let me on.  There’s room.”
Driver: “You don’t demand nothing.  There’s a guy in a white truck if you want to complain.  He’s right there.”
Liz: “We have a right to use the bus.  You don’t, you don’t, you don’t not let me on because I’m in a wheelchair.”
Driver: “You don’t demand nothing, neither.”
The driver eventually let Liz board the bus, but as she exited at the end of her ride, the driver suggested she shouldn’t be allowed to use the bus.
“You gonna complain anyway, that’s all you is! Hahaha. That’s how y’all live. You shouldn’t even be on the bus,” he said.
Muni has begun an investigation into the incident… (more)

Opponents of the Fell and Oak Street bikeway and pedestrian improvements filed an appeal last week seeking to delay implementation of street safety measures on the critical three-block stretch linking the Panhandle to the Wiggle, but the legal gambit will not slow down construction of the bike lane on Fell currently underway, the SF Municipal Transportation Agency says.
The appeal [PDF] – filed by Mark Brennan, a developer; Howard Chabner, a disability rights advocate; and Ted Loewenberg, president of the Haight-Ashbury Improvement Association — demands that the SFMTA abandon the bikeway, claiming that it discriminates against the disabled and requires environmental review under the California Environmental Quality Act (which the project was exempted from).
Following the recent removal of a car parking lane on Fell, between Baker and Scott Streets, SFMTA spokesperson Paul Rose said the agency will begin striping the bike lane tomorrow, weather permitting. “We are confident in the environmental work that went into this project,” he said. It’s unclear whether the rest of the project is in jeopardy of being delayed… (more)

Why do they need more bike lanes through the panhandle? There are already two of them. Isn’t the point of riding on your bike to ride through the park and the trees? Why do you want to ride a bike on a street when you can ride a bike through a park? This is about eliminating parking spots and pushing residents out of the neighborhood so developers can tear down the old Victorians and build more high rises.
See the Guardian’s article on Economic Cleansing.

NOTICE OF APPEAL TO THE SAN FRANCISCO BOARD OF SUPERVISORS, REQUEST FOR STAY and REVERSAL OF IMPLEMENTATION, and REQUEST FOR REVIEW

This is a Notice of Appeal of the October 16, 2012 actions of the San Francisco Municipal Transportation Agency (“MTA”) Board of Directors approving the Oak and Fell Pedestrian and Bicycle Safety Improvements project (the “Oak-Fell Project” or “the Project”). The approval of the Project was an abuse of discretion and a failure to proceed as required by the California Environmental Quality Act (“CEQA”) (Pub. Res. Code §§21000 et seq.). This is also an appeal of the San Francisco Planning Department’s October 4, 2012 Categorical Exemption of the Oak-Fell Project.

Appellants request an immediate STAY of implementation of the Project and every part of it, pending final determination on this Appeal and Request for Review, and pending full compliance with CEQA and other applicable laws. Also, because MTA has already begun implementing the Project before the time to appeal the actions described in this Appeal and Request for Review has ended, appellants also demand REVERSAL of all implementation of the Project and restoration of pre-Project conditions on all affected streets and sidewalks.

I’ve served as Chair of the PhAC for nearly five years. Since 1990 when I began using an electric wheelchair, and even before then when I walked with difficulty, I’ve seen and experienced great progress in many aspects of disability access in San Francisco, especially in access to buildings, curb ramps at intersections and disaster preparedness. It has been a privilege and a source of pride to have helped move the ball forward on physical access as chair of this committee…
During the past year, I and others have communicated these concerns many times to you Mayor Lee, the Board of Supervisors, the SFMTA Board of Directors and SFMTA staff. In that time the campaign against cars has intensified and become more insidious, and our concerns have not been addressed in a major way. Therefore, after careful consideration and with regret, I have chosen to resign.
Thanks to all of you for the opportunity to have served as Chair of the PhAC and to have worked with MOD, the MDC and many other talented, dedicated San Francisco City employees and volunteers.

Below is a comment by Howard Chabner on the proposed Fell and Oak bike lanes. Turns out that the project is not only against the interests of those who have to drive and park on neighborhood streets, but it’s even worse for the disabled.
Dear Chairman Nolan and SFMTA Board Members:
I have lived on Fell Street across from the Panhandle since 1988. The importance of promoting bicycle safety and encouraging bicycling is undeniable. I urge you not to approve the proposed Oak and Fell Street cycle track for the following reasons:
Putting an increased volume of bicycle traffic on these streets (especially Oak), which already have a heavy volume of fast-moving motor vehicles (around 30,000 vehicles daily on each of Fell and Oak, according to a presentation from SFMTA staff) and timed traffic signals, will greatly increase safety risks for pedestrians, bicyclists and motorists
This is especially true given the large number of residential and commercial driveways on these blocks, and the large number of motor vehicles turning into and out of them. Many of the garages are narrow, and visibility is limited for drivers pulling out of them; with a cycle track it would be difficult for drivers and cyclists to see each other. There is a heavy volume of motorists turning off of and onto Oak and Fell, Divisadero and the side streets; even with traffic signal improvements, cycle tracks will create more conflicts among bicyclists, pedestrians and motorists. An already complex situation will be made even more complex and hectic.
Instead, using Hayes and Page, which have stop signs instead of traffic signals, and which have a much lower volume of motor vehicles, would be safer. I know experienced bicyclists who use Hayes and Page often and believe these routes are much safer than any cycle tracks on Oak and Fell would be. Installing cycle tracks along two of the fastest and busiest vehicular thoroughfares in San Francisco contradicts SF’s stated goal of encouraging novices to bicycle by providing safe spaces with no pressure to go fast.
The Haight Ashbury Improvement Association has proposed a safer alternative for cyclists, using Hayes and Page Streets, but SFMTA has not seriously considered it. Here is a link to the HAIA plan… 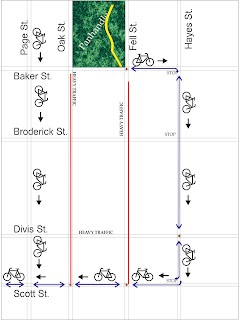 The proposed plan would negatively impact safety, parking, traffic, air quality and disability rights; it should not be adopted.

Thank you very much for considering this e-mail.