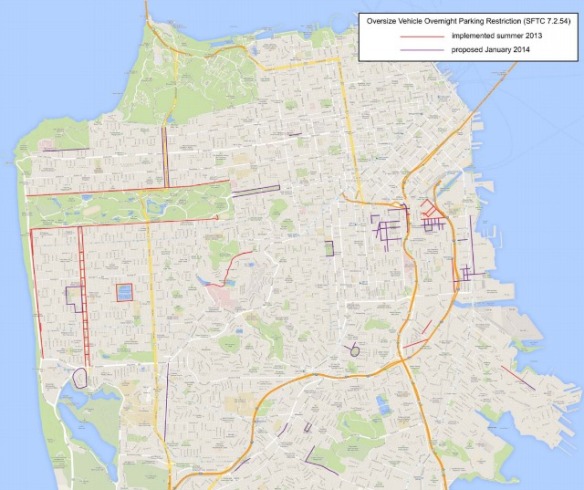 Map of locations where oversized vehicles are prohibited from overnight parking:
SFMTAIt was back in 2012 when the city of San Francisco started banning the overnight parking of “oversized” vehicles. The prohibitions were an effort to keep otherwise homeless folks living in RVs from taking up residence in certain neighborhoods — but less than four years later, SF’s top official on homelessness is exploring ways for more, not fewer, RV dwellers to park and live in the city…

But now we’re in the era of Division Street’s Tent City, a city-wide report card that ranked homelessness as SF’s top issue, and a Supe-declared shelter bed emergency. Is this a climate in which some of these Supes will change their tune, and welcome people who live in RVs back to their neighborhoods?

That’s apparently what Sam Dodge, SF’s so-called “homeless czar,” is hoping. According to the SF Chronicle, Dodge is “interested in working with a neighborhood to set up a place where RVs now parked on streets can hook up to electricity and water,” essentially creating a space for those who are currently moving their vehicles from place to place to avoid SFMTA ire.

“An RV park would be another kind of step,” Dodge told the Chron, saying that it’s already known that there are “people living in RVs on city streets.”

While this might please advocates for the homeless like Nick Kimura, a volunteer at the Coalition on Homelessness who told the Ex in 2014 that the bans were “displacement, it’s not effectively getting to the root of the problem…And the problem is people are living in vehicles, and they’re being criminalized for it,” Dodge’s move is sure to catch heat from Supes like Cohen, who described overnight RV bans as something that’s “increased people’s quality of life.”

According to Cohen, speaking in 2014, “The folks who are vehicularly housed are a very small percentage. So small that we’re able to solve their concerns on a case-by-case basis.”

But now we’re in 2016, and it’s clear that we haven’t solved much, case-by-case or not. So is an RV park a (partial) solution? And where would it go?

Glad to hear that someone with authority is considering the obvious solution of opening up car parks with facilities. I was suggesting they can start with the empty gas stations that already have plumbing and power on site. All they have to do is tear down the fences or open the gates.

Maybe some of those waiting to be developed blocks like the Warriors lot could be used while they are waiting for entitlements and permits.