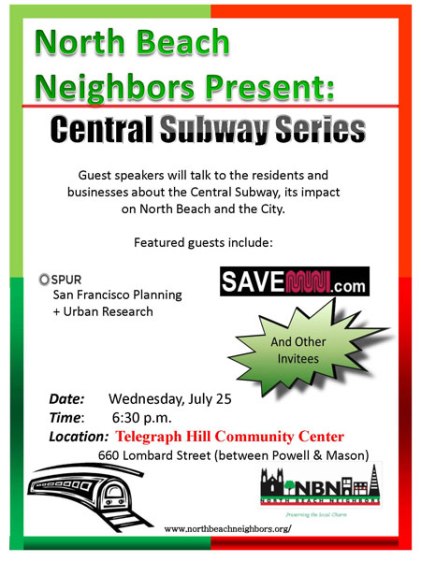 CENTRAL SUBWAY IN THE NEWS:
The Central Subway is disconnected from the Market Street corridor, Muni Metro, BART, Ferries, Transbay Terminal, High-speed Rail, regional and statewide transit networks. Muni riders must walk 1,000 feet between the Union Square Station and the existing Powell Metro/ BART Station. Hundreds of thousands of regional riders lose transit connectivity.  Per the FEIR and FTA applications, the Subway will decrease surface buses to the northeastern and southeastern sections of the city, including most of Chinatown. Today’s Muni riders will have longer travel times.
CHRONICLE:  “Central Subway work starts amid problems”
STREETSBLOG:  “Will the SFMTA Gut Muni Improvements to Prop Up the Central Subway?”
CHRONICLE/ BAY CITIZEN:  “Muni fudges on time performance, records show”

Two years’ of Central Subway tunnel construction will dessimate North Beach’s business and cultural life.  The original Central Subway design was to stop in Chinatown at Stockton/ Clay Streets.  For political reasons to gain support, the Subway was extended to Washington Street and then to North Beach via a tunnel—for a future station..  Although Chinatown businesses will be greatly harmed by construction, their merchants have not yet organized to protect themselves.  Unfortunately, much of Chinatown’s economic damage will be transferred to North Beach—in terms of boring machine extraction and staging of equipment/ materials.  In reality, Chinatown merchants and North Beach merchants should join forces to protect their livelihoods and neighborhoods.

Perspectives : KQED Radio – No Way Subway – SaveMuni.com’s Bob Feinbaum describes why the Central Subway would be a loser for San Francisco.
KQED FORUM : Radio discussion with Quentin Kopp and SFMTA on Central Subway.
The Subway to Nowhere

On June 29, 2012, the House passed their version of the Department of Transportation funding bill by a vote of 261-163 – House Approves the Fiscal Year 2013 Transportation, Housing and Urban Development Funding Bill
Legislation holds the line on spending while targeting investments for transportation systems and housing programs Americans need the most.
MCCLINTOCK (R-CA)  AMENDMENT NO. 13 prohibits funds for phase two of the “Third Street Light Rail Central Subway” project in San Francisco. The amendment was adopted on a vote of 235- 136. http://clerk.house.gov/evs/2012/roll446.xml
YOUTUBE—PRESENTATION OF AMENDMENT 13 ON HOUSE FLOOR:
http://www.youtube.com/watch?v=DRGODHF1Uco&feature=player_embedded

Next Steps in Legislative Process – The legislative process continues in the U.S. Senate and ultimately the Senate/ House Conference Committee—where the fate of the Central Subway will be debated for several months.  SaveMuni.com and San Franciscans will better inform the process in Washington.

Quicker Jobs Now – Instead of a tiny 1.6 mile, $1.6 billion subway, $500 million of existing state/ local funds can be poured into the citywide Muni system and the broad bottom base of the economy—with massive local jobs.  San Francisco’s economy can be jump-started with hundreds of miles of beautiful transit-priority streets—energizing cafés, restaurants, retail, services, business corridors, neighborhoods…

The California Transportation Commission approved $61 million of High Speed Rail (HSR) Connectivity Funds for the Central Subway despite its elimination of the T-Line’s loop to the Market Street Corridor and Transbay Terminal. The Central Subway has compromised HSR’s credibility. (according to savemuni.org.)

MTA has been accused of falsifying data to justify the Central Subway and conducting an expensive misinformation campaign.