Mayoral candidate, Supervisor Jane Kim speaks in front of a cheering crowd, while Supervisor Peskin looks on, in the midst of a crowd of  YIMBYs creaming for up-zoning in all the neighborhoods, one at a time. photo by zrants.

A polarizing housing bill that would force California cities to allow taller apartment buildings by BART stops and other transit hubs has been pummeled with opposition from local officials — a group that now includes former colleagues of the bill’s author, San Francisco Democrat Sen. Scott Wiener.

In the latest blow to Senate Bill 827, the San Francisco Board of Supervisors on Tuesday voted to oppose Wiener’s bill, joining smaller cities such as Lafayette, Cupertino, Palo Alto and Milpitas. A week earlier, the Los Angeles City Council took the same stance, unanimously, with one councilman calling the legislation “insanity.” 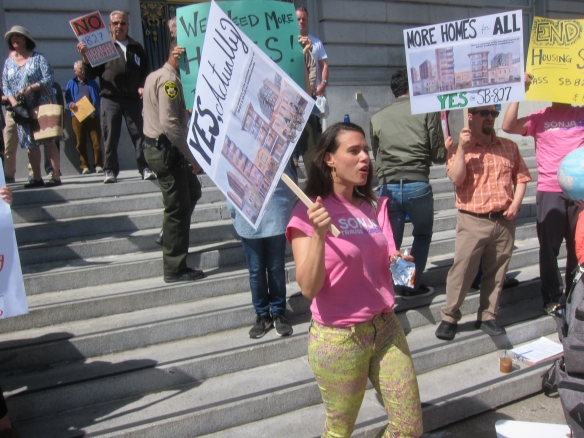 The above photo by zrants was snapped at the press conference arranged for anti-SB 827 supporters, where YIMBY queen Sonja Trauss, who is running for office in D-6 to replace Jane Kim, struts her stuff holding a poster made from art stolen from the opposition. Her antics, along with her small group of disruptive followers yelling over the speakers, backfired. The YIMBY argument that “new and future” citizens are more entitled than existing ones to live in San Francisco and the aggressive nature of these invaders is not winning many hearts and minds among the voters.

Laura Clark, whose pro-housing development YIMBY (Yes In My Backyard) coalition is sponsoring the bill, said she was not surprised local officials would take issue with it… (more)

It should be noted that this is not the only bill YIMBY is pushing to move residents out of their homes by up-zoning the city. Backed by developers, they are leading the charge to evict by rent increases and any other means possible to make room for the characterless stack and pack housing projects developers love to build. SB 828 is also making its way through the Sacramento Senate and that will push even higher requirements for density that cities have achieved.

Many people who once supported density are reconsidering due to the negative impacts gentrification is having on communities that are seeing an astronomical increase in homelessness. One way under consideration to keep people housed is to pass  AB 1505 and repeal Costa-Hawkins and allow expansion of rent control rules. Several efforts are also being made to Amend the Ellis Act that is blamed for many illegal evictions.

Supervisor Aaron Peskin mentioned these as preferable alternatives to SB 827 in his statement, before the Board Voted 8-3 to oppose SB 827. So far the San Francisco media has mostly ignored the opposition to the forced growth and density movement. They are not endearing themselves to the public by ignoring them and supporting the developers.