When I lived in the Mission, I used to have a parking prayer: “I wish I may, I wish I might find a safe parking spot tonight.” That’s because parking on the street in San Francisco is the worst. Not only because it feels like there’s never street parking when you need it, but also because when you find that precious spot, there are a thousand different rules you have to follow — curbing your wheels, marathon street closures, street cleaning, residential time limits, Giants games street closures, meters, permits, double parking, loading zones. Oh my.

So, after I met an SFMTA Parking Control Officer randomly at a bar earlier this year, I was excited — in a full-on nerd way — that he agreed to get buzzed over a couple beers, and let me pick his brain about parking in San Francisco. He asked to remain anonymous for this story, but here is what we talked about…(more)

How to avoid a ticket if you’re unsure, especially at large events…

What tricks to get out of a ticket don’t work?…

Any tips for dealing with a ticket?…

On getting your car towed…

What about curbing your wheels?…
You must have a front license plate on your vehicle… (more)

Motion 120911.01 – The SFMTA CAC recommends that sidewalk parking laws be enforced not just against cars that leave less than four feet of direct-line travel room for pedestrians, but additionally against any car being more than one foot into the sidewalk…  (more)

We think is what we think this rule may mean… 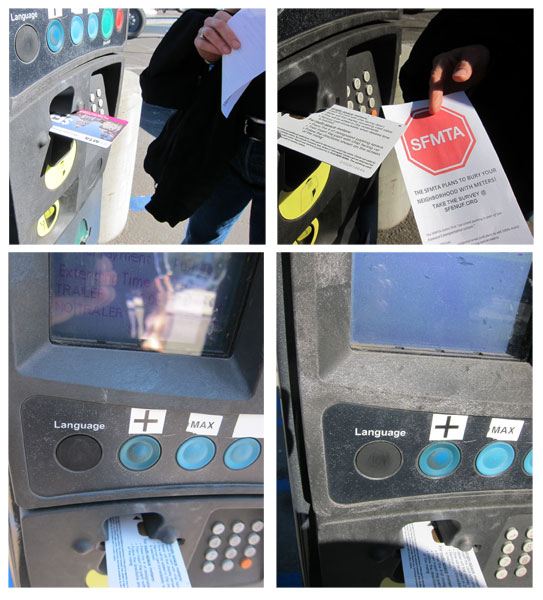 Impromtu photo op in the Mission Bay on Labor Day. How does this work? Does it?
Turns out the MTA card does not work. You have to use your credit card. What is the point in buying an MTA card when it doesn’t work? Fine with me. I handed out my solution which is Stop the SFMTA.

No waiting for Sunday parking in this lot. It’s already here last I looked. And all the meters on Terry Francois Blvd. are working on Sundays, if you believe the signs.

I just received a ticket on Howard between Steuart and The Embarcadero on the South side of the street (the ballpark side). It was for 7.2.25 Red Zone and the fine is $98. There used to be meters here and they suddenly took them away. I was just assuming that they were changing the meters to the new, hungrier meters and that I happened to catch a free day. Much to my chagrin, that was not the case. I cannot figure out why it was for a red zone.  How do I contest this and have half a chance at winning?  Will they just say, “We’re right, you’re wrong, pay the money, MUNI needs a new pair of shoes”?…

Remember the 100-foot rule?… And lastly, it makes no logical sense to take these spots away…It doesn’t seem fair, and it makes interpreting the traffic laws like a game of TEGWAR (The exciting game without any rules)…

I take a photos of each parking incident  just in case I need to argue my case later.

The audit, conducted by the city controller’s office,  looked at how parking control officers were deployed in the city, if officers are adequately trained and if staffing levels are sufficient. The study took place between July 1, 2010 and Dec. 31 of 2011.

The report found that although officers received training before patrolling the streets, of the 168 officers surveyed by the controller’s office, 73 percent said they would benefit from more training on parking violation codes, and 47 percent said they are unsure how to enforce some of the city’s parking regulations.

So now we know, the meter maids can’t keep up with all the changes in the parking rules and regs either. How can drivers to be expected to know the rules when the meters maids don’t?

Can a law, regulation or rule be enforced if knowledge of it is not available to the public?

A: Only those who received a ticket for not knowing it.

On Jan. 19, President Obama announced measures to make tourism more attractive to foreigners.
I listened to his comments, which were delivered at Disney World in Florida, the following morning, driving into San Francisco on assignment for my London newspaper.
Mayor Ed Lee spoke next, saying how San Francisco was particularly suited for tourism.
I’ve spent much of the past 30 years working and holidaying in your country, often in San Francisco.
But what happened later that day has made me reconsider my glowing opinion of your city, and of America, because I gained the impression for the first time that your traffic law enforcement is mean, very possibly corrupt – and targeting the tourists your president and mayor say they want. (more)