If you build it, they will come, the saying goes. But that’s exactly the problem when it comes to cars.

City leaders say requiring developers to build parking spaces in new projects invites too many new cars into The City, congesting streets and harming the environment.

Now Supervisor Jane Kim is seeking to rescind a requirement that developers create minimum amounts of parking when they build new housing or commercial property, as part of a larger effort to reform a city policy called “Better Streets.”… (more)

This kind of logic is what got us on the five worst traffic in the world list.

A new traffic study puts the Bay Area’s largest cities as amongst the worst in the country. Additionally, the study found that people who drive spend around 200 hours on the road a year.

WalletHub crunched numbers from the 100 most populated cities in the U.S., taking into account things like traffic and road conditions and the cost of owning and maintaining a car… (more) 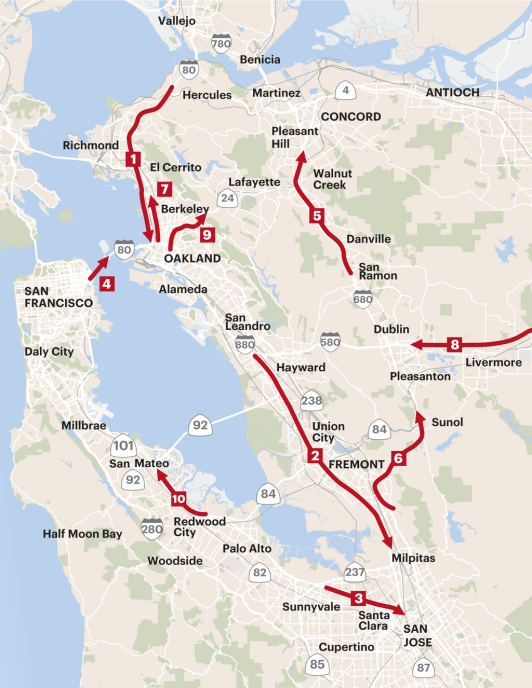 It will surprise few that Bay Area residents are increasingly frustrated — and overwhelmingly pessimistic — about traffic woes and bottlenecks in the region.

Anyone who monitors early morning or late afternoon traffic reports in the region won’t fall out of bed when they see this data. Freeways are clogged from crowded Highways 29 and 37 in the Wine Country to U.S. Highway 101 down the Peninsula to the I-680 corridor to the Nasty Nimitz, the Bay Bridge, or almost any other major route you want to talk about. BART’s jammed with record ridership. And pretty much every other option is crammed, jammed, packed or otherwise stymied.

Some of the negative vibes are self inflicted, since 79 percent of those surveyed said they typically drive alone for commuting or running errands, up from 74 percent last year.

“We’re running out of adjectives to describe how bad Bay Area traffic is and the misery it’s causing,” Jim Wunderman, president and CEO of the Bay Area Council, said in a statement. He says the business community and public transit agencies shouldn’t accept the mess as inevitable, suggesting that new technologies, carpooling apps and intelligent transportation design has the potential to make things better.

But the public seems to have a different take, along lines of voters’ grim view of 2016 political options.

As for solutions, the Bay Area Council highlights the fact that 70 percent of those surveyed somewhat or strongly support a second BART Transbay Tunnel, although without cost and funding sources that support may not mean much…